If you ask me, one of the best video game series ever produced is Cyan’s Myst series, my favorite being Riven. I designed a series of five posters based on Riven’s five islands, each of which held its own mysteries and character, rendered in a style reminiscent of NPS travel posters. 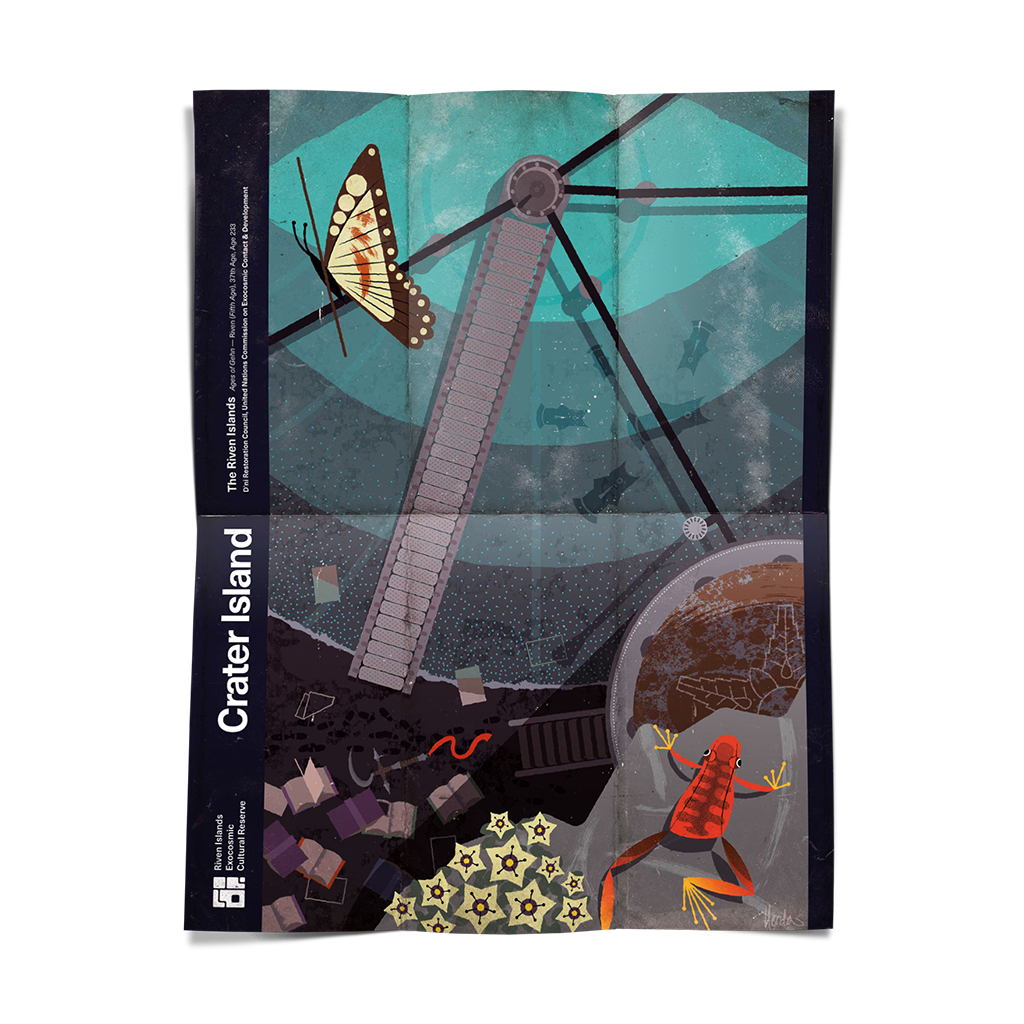 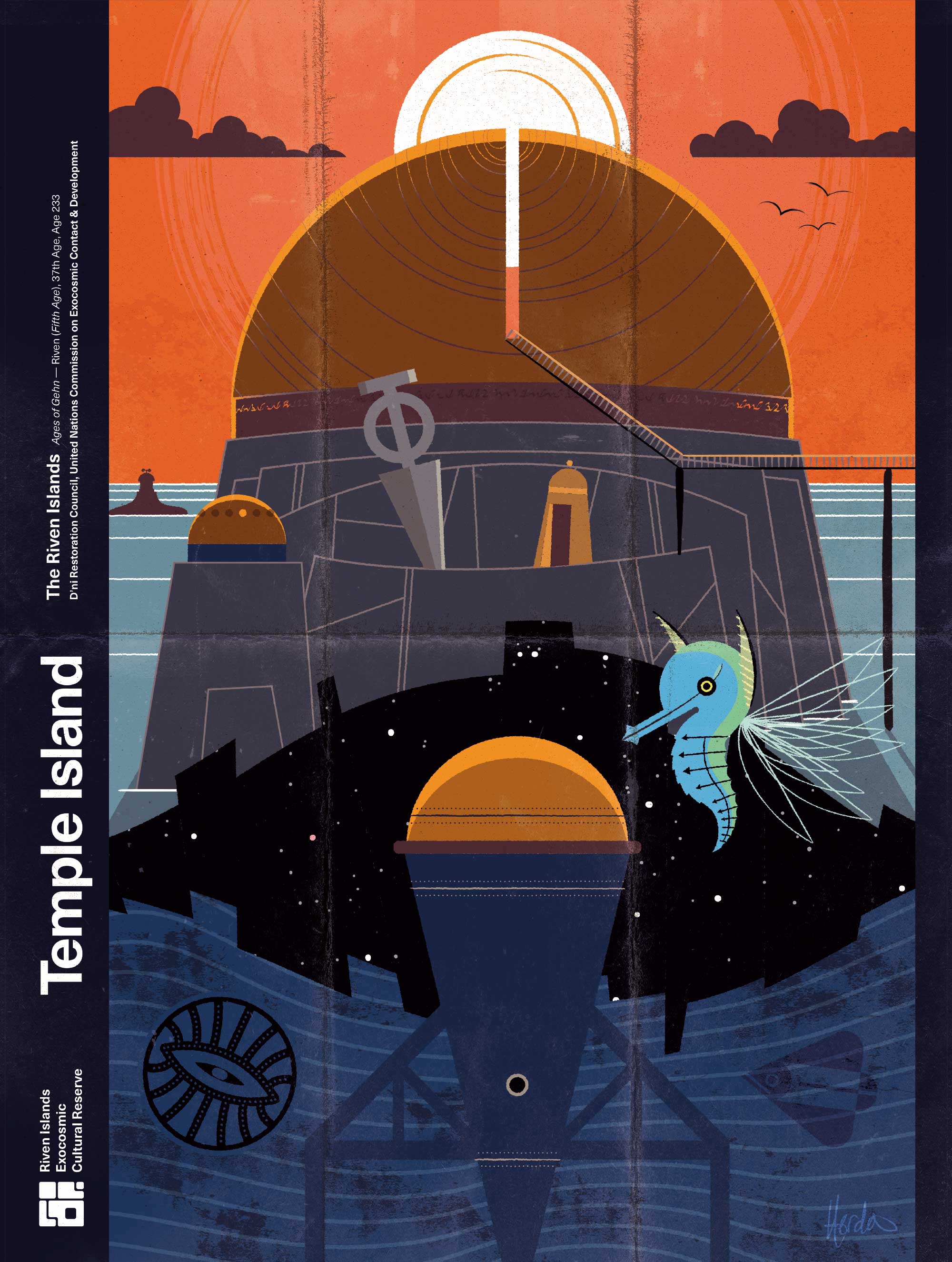 Temple Island serves as a “key” for the entire poster series. It incorporates several elements you’d see near the game’s entry point, but they aren’t necessarily depicted in an arrangement that you’d see them in in-game.

The Star Fissure, combined with the telescope, is the first of many hints throughout the poster series that Gehn’s watchful eye is an ever-present observer of the player.

A lone “flitter” hovers near the viewer, a sign of the vibrant flora and fauna of the world. While you never see one in-game, you find glyphs depicting them in the Moiety gate room. 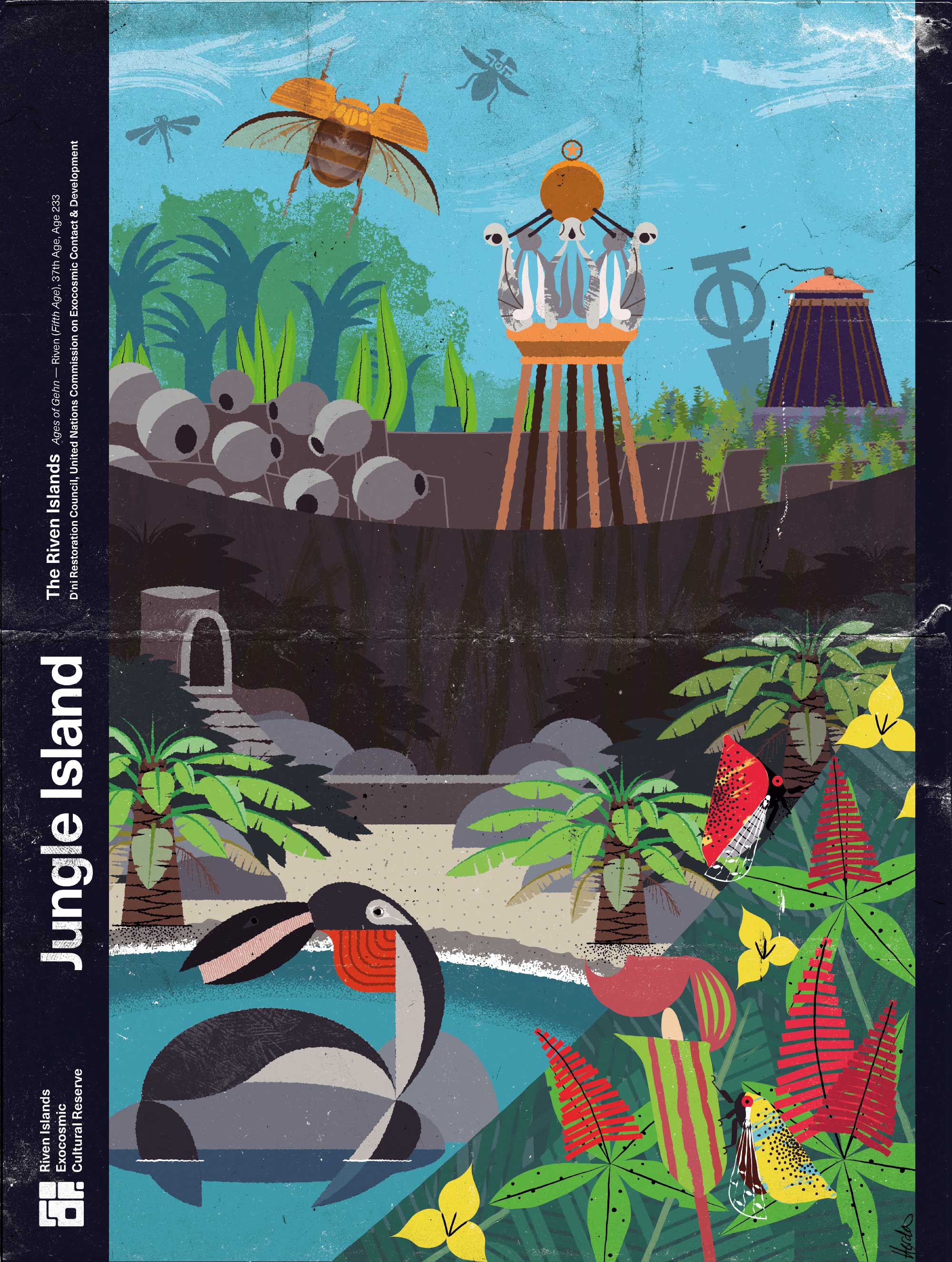 Jungle Island is by far the most lively of the islands of Riven. Even so, it shows signs of Gehn’s destructive nature, and this poster was designed to juxtapose the two.

Felled trees, fleeing insects, and the wahrk gallows sit among the foliage and creatures that inhabit the island, again inspired by Moiety glyphs and other allusions made throughout the game to creatures big and small. 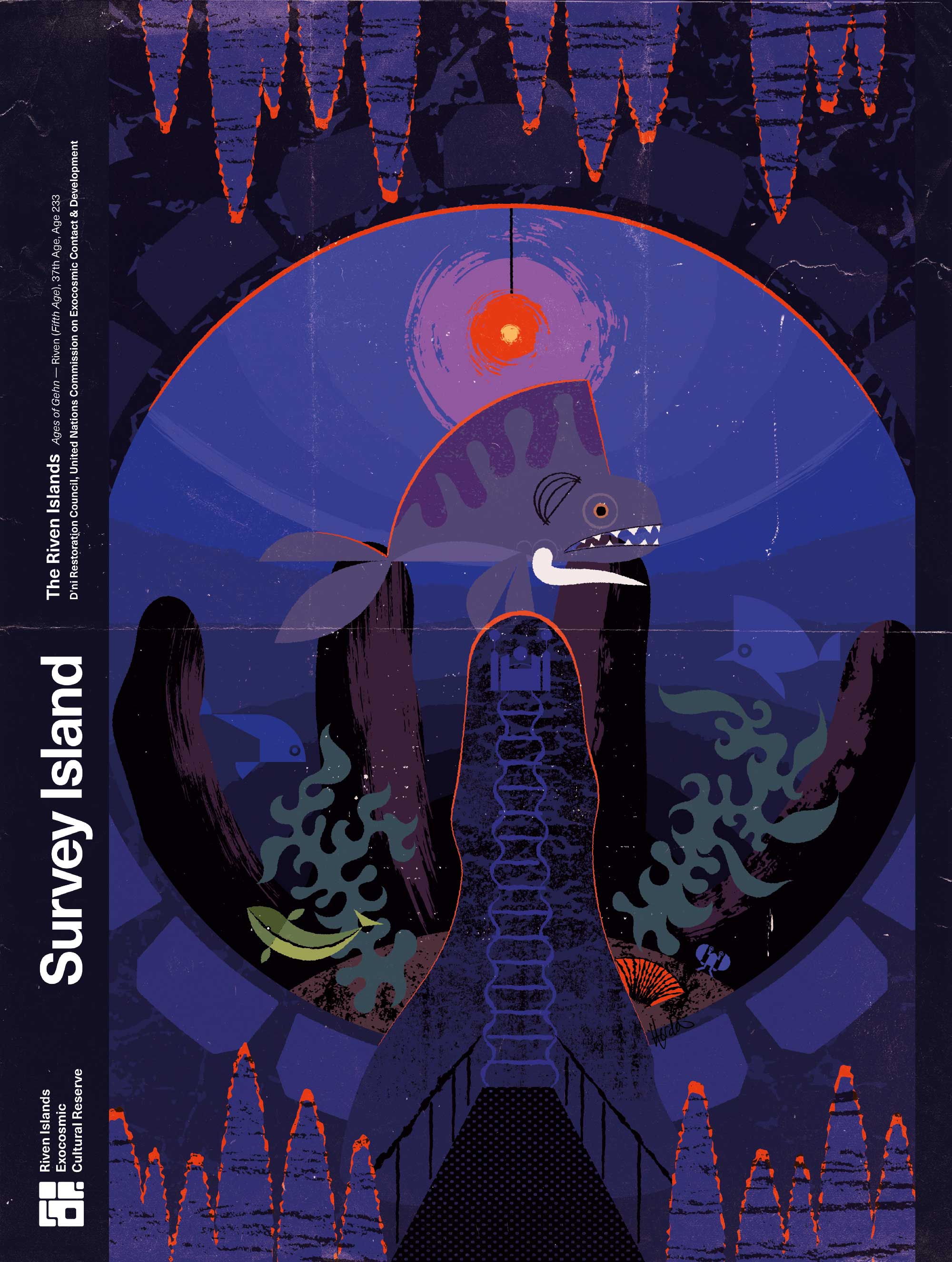 Survey Island is the nerve center of Gehn’s oppressive regime over Riven. The wahrk is well-trained to serve as a tool of fear and death, enslaved by the red light and trained to consume any villager who dares to question or fight Gehn’s authority.

The viewer can again see Gehn’s watchful eye, represented by the light, and his grip (depicted as rock-pillar “fingers”). Gehn holds Riven’s fate in the palm of his hand, as if it were a snowglobe. 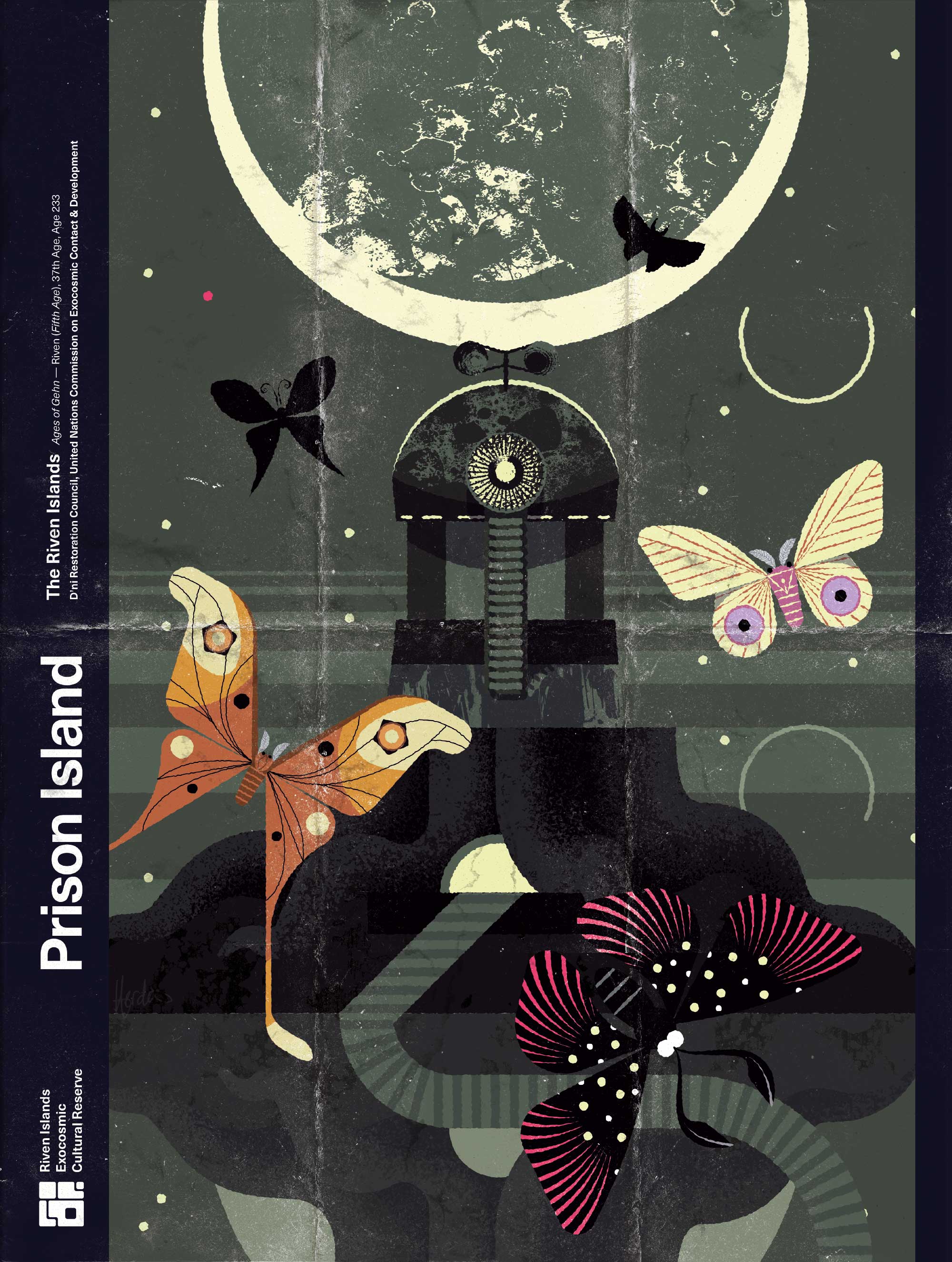 Prison Island is perhaps the island we know the least about. Once a giant tree that towered above the combined islands, it now is only a stump atop a rock, crowned with an iron prison for holding Catherine as leverage over Atrus.

While the prison itself is a symbol of Gehn’s power and oppression, Catherine could not be kept confined so easily—her dreams are bound by nothing. I took a bit of artistic license here and depicted the age at night, complete with two beautiful, looming moons and many moths and butterflies, as free as Catherine’s creativity. 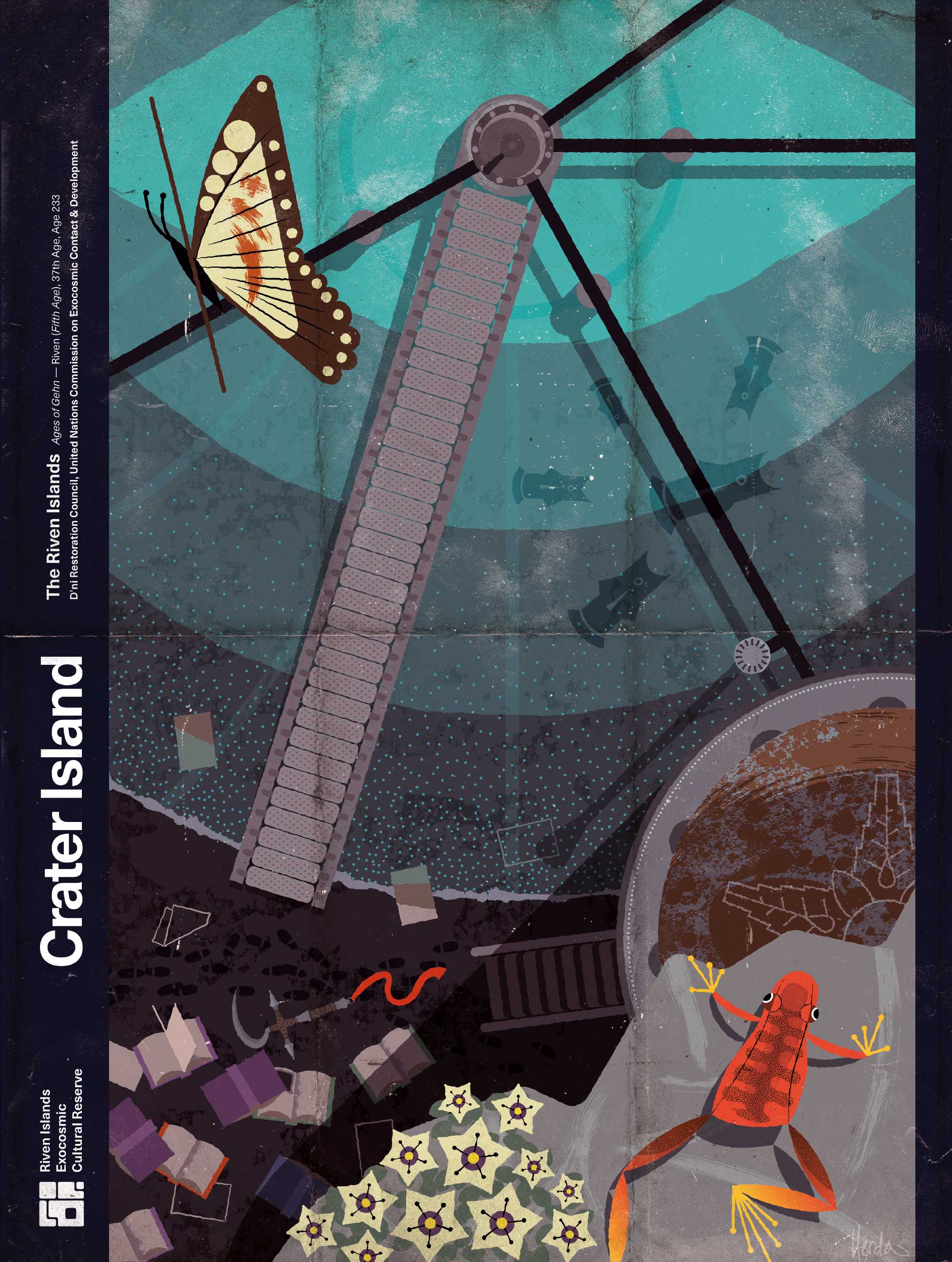 Crater Island was Gehn’s industrial base, serving as the manufacturing center for the ink, paper, and books he hoped to use to rebuild D’ni.

I chose to depict it from above, with books and paper strewn across the ground, perhaps after a Moiety raid.

High above we see a butterfly and a small ytram surveying the scene—life, and hope, still clings to this barren wasteland.